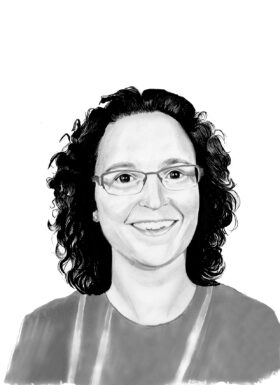 Annemieke Aartsma-Rus (1977) studied Biomedical Science at Leiden University where she was also awarded her PhD in 2005. During her PhD, she made an important contribution to the development of a new therapy for Duchenne muscular dystrophy, which has since been approved in the US and Japan. Since then she has been working at Leiden University Medical Centre, currently as Professor of Translational Genetics.

In the period 2005-2020, Aartsma-Rus received several grants, including a Vidi grant, grants from the Duchenne Parent Project and the Princess Beatrix Muscle Fund, and a network grant from the Cooperation of Science and Technology. In 2011 she received the Duchenne Award and in 2020 the EURORDIS Black Pearl Science Award. Aartsma-Rus joined The Young Academy in 2014.

Diminished muscle and heart function, breathing difficulties, wheelchair use from the age of 10 and no telling whether you will even make it to your 30th birthday. For patients with Duchenne Muscular Dystrophy, this is the harsh reality: a serious muscle disease which causes boys and men worldwide to die at an early age.

For a long time hardly any treatment was possible, but thanks to the pioneering work of Annemieke Aartsma-Rus, a therapy has now been sanctioned for use in America and Japan. In Europe, where the approval process is different, it is currently awaiting approval. Exon skipping is the name of the therapy that aims to slow down the progression of this fatal disease. Patients with Duchenne are lacking the protein dystrophin because the gene code for that protein is unreadable in them. Exon skipping can make the code readable again, resulting in the production of partially effective dystrophin.

In a nutshell, a gene code contains the recipe for muscle cells to make dystrophin protein, and that recipe is spread out over pieces of genes, called exons. In a healthy person there are 79 exons which fit together like pieces of a puzzle and are all needed to enable the gene code to be read. However, in a person with Duchenne disease, one or more pieces are missing, so the puzzle does not fit together, and the gene code becomes unreadable. Thanks to exon skipping, an extra piece is removed, making the pieces fit together and the code readable again.

Aartsma-Rus is engaged in fundamental research into how basic processes surrounding dystrophin production work, and how exons are assembled to form its protein code, and she brings that knowledge to the clinic. This has led to several groundbreaking insights, for example that exon skipping not only works in animal models but also in humans. She has also discovered that even a very small amount of the protein is enough to slow down the disease process in patients with Duchenne significantly.

What is special about her working method is that, from the very beginning, Annemieke Aartsma-Rus always carries out her research in close cooperation with patient organisations. She asks patients what they expect from a treatment, apart from getting better. It turns out that patients are especially concerned about not losing further functionality: someone who can still walk does not want to end up in a wheelchair, and someone who is already in a wheelchair wants to keep using his or her fingers to control the wheelchair. These answers motivated Aartsma-Rus to focus with even more concentration on slowing down the disease process.

There are many points of departure for new research. Aartsma-Rus now knows everything about the properties of exons, but how they manage to find each other to form a genetic code is still unclear. Once that is known, treatments can be significantly improved, delaying the progression of the disease to the greatest possible extent.