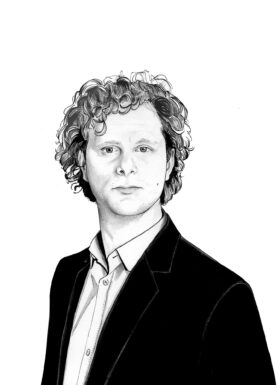 Appy Sluijs (1980) studied biology and biogeology in Utrecht and at the University of California at Santa Cruz. After graduating in Paleoecology, he remained as a researcher in Utrecht. In 2014 he was appointed Professor of Paleoceanography. Whilst still a young researcher, he already has a remarkable array of frequently cited publications to his name in leading academic journals, Science and Nature.

Sluijs received a Veni grant from the Dutch Organisation for Scientific Research (NWO) and a Starting Grant of € 1.5 million from the European Research Council. In addition, he has received prestigious awards such as the James B. Macelwane Medal from the American Geophysical Union, the Outstanding Young Scientist Award from the European Geosciences Union and the Heineken Young Scientists Award for Environmental Sciences.

Appy Sluijs investigates the relationship between CO2, climate and ocean life throughout the history of the Earth.

Looking ahead thanks to a prehistoric heatwave

About 56 million years ago the Earth underwent a sudden period of intense global warming. During just a few thousand years so much extra carbon dioxide entered the atmosphere that the average global temperature increased by about five degrees Celsius.

The Paleocene-Eocene Thermal Maximum (PETM), as this prehistoric heatwave is known, caused dramatic changes on planet Earth. Warmer oceans expanded at the expense of land, plant and animal species were cast adrift or died out, whilst others (including our own ancestors) were given new opportunities. These effects are comparable to those which we can expect as a result of today’s global warming.

Appy Sluijs examines rock from deep boreholes for sediments from the ocean floors of millions of years ago. These rocks contain fossil and chemical traces of the dramatic changes and Sluijs uses them to reconstruct the interaction between the atmosphere and the oceans.

Sluijs thinks the dramatic peak of 56 million years ago evolved from a chain reaction. A gradual warming due to volcanic eruptions leading to the melting of methane hydrate on the ocean floor, which meant masses of methane bubbled up in a very short time. In the water and in the earth’s atmosphere the methane was converted into large amounts of carbon dioxide.

It was to take a hundred thousand years before all this extra carbon dioxide was absorbed in sediments and the climate cooled again.

Researchers such as Appy Sluijs use the PETM as a natural experiment to predict what the consequences of current global warming could be. And if we were to stop burning coal, oil and gas today, how long would it be before global warming would stop?