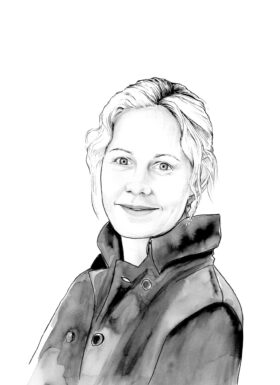 Birte Forstmann (1976) studied psychology at the Johannes Gutenberg University in Mainz (Germany). She went on to receive her PhD from the Max Planck Institute for Human Cognitive and Brain Sciences in Leipzig. She has held various positions at both the University of Amsterdam and Leiden University, and is now Professor at both institutions.

Forstmann has received an impressive number of grants. In 2008 she received a VENI from NWO, which was followed by a VIDI in 2012 and a VICI in 2018. On top of that she received both an ERC starting grant and an ERC concept grant.

Between brain and behaviour

Why do people behave the way they do? It is a question that attracts many disciplines, from psychologists who focus on describing the behaviour accurately and then to explaining it, to neuroscientists who seek to unravel the anatomy of the brain and the senses.

Birte Forstmann studies the brain to uncover the mechanisms that make it possible for people to react to their environment. In doing so, she bridges the gap between various scientific disciplines that study behaviour and the brain. In her work she combines mathematical models with established methods like EEG (electro-encephalography), anatomy and innovative imaging techniques such as functional and high-resolution Magnetic Resonance Imaging (MRI). By comparing the brains of healthy individuals with those who are ill, she learns more about the role a disease can have in altering the brain.

Her work leads to a better understanding of the topography of various areas in the brain. Forstmann’s main focus is the subcortex, the middle part of the brain. These areas play a major part in Parkinson’s disease. One treatment for this condition is ‘deep brain stimulation,’ in which an electrode is placed in the subthalamic nucleus. This structure is in a part of the subcortex which has not yet been mapped in detail in a living person. More knowledge about this area could help understanding of the negative side effects of deep brain stimulation, and lead to improvements in the treatment.