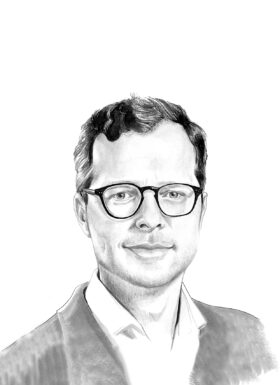 Christian Lange (1975) studied Islamology and Religious Studies in Tübingen, Cairo, Paris and Muscat. After gaining his PhD at Harvard (2006), he taught Islamology at Edinburgh University. Since 2011, he has been Professor of Arabic and Islamic Studies at Utrecht University.

Lange is a member of the KNAW, the Young Academy of Europe, and is an alumnus of the Young Academy. Since 2019, he has been director of the Netherlands Interuniversity School for Islamic Studies (NISIS).

Lange has written books in German, English and Dutch on the religious and social history of the Islamic world. His work has been translated into Arabic and he has been awarded two ERC Grants (2010, 2016), the British-Kuwait Friendship Society Bookprize (2016) and the World Award for Book of the Year in the Islamic Republic of Iran (2017).

Christian Lange studies the classical literature of the Middle East, in Arabic and Persian, in order to gain insight into the roots of the rich Islamic civilisation.

The colourful roots of the Islamic civilisation

According to Christian Lange, both Muslims and non-Muslims generally have a limited idea of what Islam actually is. The answer to this question often focused on the prevailing definition of Islam as a uniform religion and culture that revolves around the Koran, the Prophet and the five pillars.

Lange is changing this view step by step with his pioneering research work. He presents a different, more colourful picture of Islamic civilisation. Through studying classical Arabic and Persian literature in order to uncover the roots of the rich Islamic civilisation. For instance, he studies how Islamic criminal law is actually applied, how the exchange of looks between men and women is described in various Islamic contexts, and how various Muslim groups think about the hereafter and how that influences their behaviour today: subjects which are of current concern.

Lange discovered, for instance, that the afterlife in Islamic traditions is not generally regarded as something that exists in the distant future; on the contrary, the hereafter often has a direct impact on the daily lives of Muslims. During religious rituals or visits to holy Islamic cities, paradise is often inherently present, so that one could say that some Muslims already have a small experience of paradise here on earth. In short, there is a constant cross-pollination between the hereafter and present existence here on earth. This is an innovative insight that has never before been so thoroughly researched and described within Islamology.

In his research, Lange draws on diverse sources, such as historical chronicles and poetry, in order to find out how Islamic criminal law, for example, was actually applied. He is a pioneer in the field of Arabic digital humanities, in which large quantities of digitised historical texts can be searched and analysed with the help of algorithms at the click of a mouse. In addition, working alongside other disciplines such as religious sciences, he has developed a new conceptual apparatus to analyse his historical sources.

Lange has an impressive and diverse curriculum vitae that shows how much he has achieved in a short time. He publishes with leading academic publishers and in prestigious journals, including from Cambridge University Press, and thereby makes his research findings accessible to a wider audience.

In the near future Lange wants to delve deeper into the history of the senses in Islamic culture by asking how Muslims use their senses and bodies in everyday interaction with each other and with non-Muslims. He also wants to investigate how the five senses were viewed in different epistemological Islamic traditions.