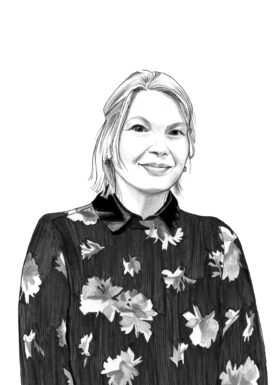 Since then Crone has initiated the establishment of the Brain and Development Research Center in Leiden. She leads a large national “gravity programme” in the area of neuroimaging and acts as a figurehead for ‘Brains, Cognition and Behaviour’, a part of the National Science Agenda.

In 2015 Crone received a Vici grant from NWO of €1.5 million, and in 2016 a prestigious Consolidator Grant of € 2million from the European Research Council. She was president of the Young Academy and is now a member of the KNAW and the Academia Europaea.

Between birth and adulthood our brains make develop in turbulent bursts. The brain learns in which world it finds itself, and how it can affect that world through complex decisions about behaviour; when to choose harmony, when conflict; when security, and when risk?

Eveline Crone explores how brain development takes place, and what consequences this has for how young people behave. In the course of her research she uses a combination of many different scientific methods from functional MRI brain scans and heart rate measurements to psychological testing.

Her breakthrough came with the discovery that the erratic behaviour of adolescents is partly linked to the fact that individual parts of the brain do not develop at the same time. During puberty it is not only the body that experiences a growth spurt: the brain also responds strongly to an increase in sex hormones. Brain centers determining emotions develop more quickly than those which govern self-control. The outcome is at times unrestrained and irresponsible adolescent behaviour.

It is characteristic of Crone that she does not see adolescence as an inevitable evil but as a useful development period, a phase in which the brain learn to orientate itself in a broader social environment. By gaining a better understanding of the neural changes which occur she hopes to learn how the brain uses this phase to develop a mature range of behavioural options, including creativity and empathy.