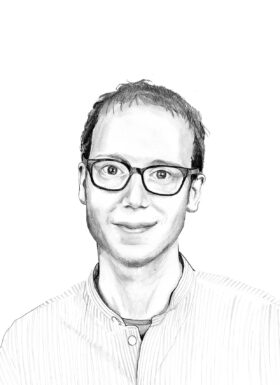 De Lange has received several awards and a large number of grants for his research, including an ERC Starting Grant, ERC Consolidator Grant, a Veni and Vidi grant from NWO and the prestigious Heineken Young Scientist Award (2012) for Cognitive Science. In 2020, a TV broadcast was devoted to his research in the VPRO series Grote Vragen (Big Questions).

Floris de Lange’s research unravels how perception arises from the neurobiological processes in the brain, and in particular how the brain operates as a prediction machine.

Mind reading with MRI scanners, the human brain as a prediction machine – Floris de Lange’s research almost sounds like a science fiction film. De Lange has been fascinated by the human psyche for many years. The fact that his own father suffered from severe depression only intensified his interest. This made De Lange realise that what we perceive is created by our brains, and that each brain therefore manufactures its own unique perceptions.

Our brain indeed makes predictions all day long. When you want to open the front door, your brain predicts how forcefully you should push down the door handle, and when you take a carton of eggs out of the fridge, it predicts roughly how heavy the carton will weigh. These patterns of expectation are useful for noticing changes, for example if the egg carton has leaked because of a broken egg, you can react quickly. De Lange has shown that predictions make the brain more energy-efficient: they allow it to save computing power for processing information that deviates from what is expected.

De Lange’s research focuses in particular on the question of how the brain’s continuous stream of predictions is generated at the neurobiological level. Where, for example, is precognition located in the brain (in the case of the egg carton, this precognition includes the fact that you remember how many eggs were still in it), and how is this information combined with new input from your senses? These are questions that have hardly been studied at all previously.

Thanks to De Lange’s incisive research, it has now been established that our brain is not a machine that processes information passively, as was long believed. On the contrary: the brain is a prediction machine that actively uses everything it learns to predict the future. De Lange has also shown when, how and why the visual brain combines predictions with visual information. A pioneering insight was that precognition is located in a different layer of the brain from that which processes incoming information. If you expect to see a rabbit, that expectation is in a different layer than when you actually see the rabbit. This knowledge can, among other things, lead to a better understanding of what goes wrong in people with schizophrenia who can no longer distinguish properly between reality and thoughts.

One theme De Lange is currently focusing on is what happens in the brain when we are surprised. People are curious creatures and are constantly looking for surprises and adventures, while those are precisely the situations which the brain can do little to predict. De Lange studies how exactly this process works and what the brain gains from this curiosity.