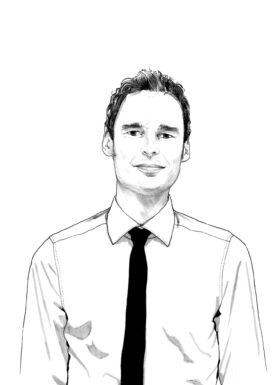 Jeroen Geurts (1978) studied medical biology at the University of Amsterdam and was awarded his PhD by the Vrije University in the same city. As a VUmc-researcher he was later appointed Professor of Translational Neuroscience and head of the Department of Anatomy and Neuroscience. He is also a professor in Calgary (Canada). For several years Geurts served as president of the Young Academy of the KNAW. He is a member of The Health Council of the Netherlands and sat on various committees within the framework of the National Research Agenda. He is founder of ‘Brein in Beeld‘, an organisation that spreads knowledge about brains and promotes interdisciplinary brain research.

In addition to his research, starting in 2017, Geurts has taken on the role of president of the research funding Netherlands Institute for Health Research and Development (ZonMw) and serves as member of the Board of Directors of the Dutch Organisation for Scientific Research (NWO).

Jeroen Geurts is searching for the cause of multiple sclerosis (MS), a neurodegenerative disease that affects one in every thousand Dutch people.

Generalist in hearts and brains

According to standard theories the cause of multiple sclerosis (MS) lies in attacks by our immune systems on the white insulation layer around the ‘power cables’ in our nervous system. The more this insulation disappears, the worse the transmission of electrical signals becomes, with all the consequences that that entails. MS has therefore long been called a “classic white matter disease ‘.

The work of Jeroen Geurts casts doubt on this theory: close examination has revealed that it is not only the white insulation in MS patients which is affected but the ‘grey matter’, with networks of nerve cells, which also exhibits gaps. This explains why, for example, patients have cognitive problems in addition to the more commonly recognised motor difficulties.

The autoimmune reaction, long accepted as a cause, might in fact itself be a result of a deeper, as yet unknown, cause.

With boundless energy, Geurts continues his search for the ‘real MS’, the process that topples the first domino in the line. He does not limit himself only to MS, but as a true generalist also examines other brain disorders such as Parkinson’s, Alzheimer’s and brain tumors. In addition to the modern brain scan techniques he uses neuropsychological, histological, and other mathematical methods.

And as evidence of Geurts’ broad vision a professor of Philosophy of Neuroscience is a key player in the research team. By covering all angles, he hopes to discover the path that will lead him to a new theory on how MS originates.