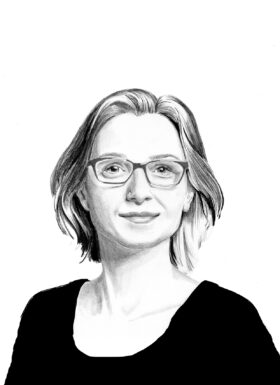 Lisa Herzog (1983) studied Economics, Philosophy and Political Theory in Munich and Oxford and worked at the universities of St. Gallen, Frankfurt, Stanford and TU Munich. Since 2019, she has been Professor of Political Philosophy at the University of Groningen.

Herzog was a research fellow at the Wissenschaftskolleg zu Berlin and is a member of the Global Young Academy. In 2019 she received the Tractatus-Premie and the German Prize for Philosophy and Social Ethics. She has published widely on the philosophical dimensions of markets, liberalism, social justice, ethics in organisations and the future of work. Her latest widely discussed English-language monograph Reclaiming the System (2018) was published by Oxford University Press. The current focus of her work is on democratic organisations, professional ethics and the role of knowledge in democracies.

Lisa Herzog investigates how moral and democratic norms can play a greater role in our economic system.

Lisa Herzog was once told that philosophical issues and economic models could not be studied in combination, because the fields of study were too far apart. And indeed, during her studies of philosophy and economics, she had already noticed that what she learned in each could hardly be reconciled. This led to her deep-rooted mission to bring these two disciplines together.

What does it mean to act morally when employees feel they are just small cogs on the wheel of a large organisation? And how should organisations be structured so that moral standards and values play a greater role in the actions of employees? Herzog examines such socially relevant questions, always viewing the economic system from a philosophical perspective.

Among other things, she has studied hierarchical structures and power relations in large organisations and shown how they can be harmful for our democratic society. Many existing economic models revolve around the assumption that people work in order to earn (as much) money as possible, while Herzog’s research shows that employees work just as well for other reasons, such as social contact and meaningfulness.

Herzog moves with great ease between history and current affairs, between economics, psychology and philosophy, and between pure research and its more practical application. Her research connects these different fields in an innovative way. Her impressive publications on the cutting edge of political philosophy and business ethics, including monographs published by Oxford University Press and her articles in various leading journals, make an original contribution in both a scientific and a social sense.

Herzog is currently working on a book in which she examines the relationship between knowledge and values, and between the market, democracy and information. What do citizens need to know to make democracies work? And what roles do markets and democratic institutions play in opening up knowledge for society, such as information about corona or climate change? Only when these kinds of politico-philosophical questions become a regular part of studies of our economic model, Herzog argues, will there be an opportunity for positive change.