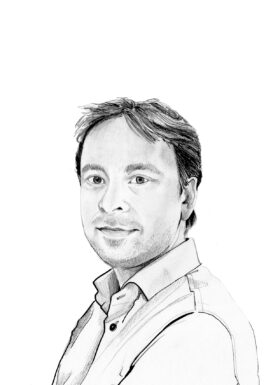 Vermeulen received an ERC Starting Grant and a Vidi grant from NWO, and he leads a research group at the Oncode Institute. In 2017, he received an Investigator Award from the New York Stem Cell Foundation, a $1.5 million prize.

Louis Vermeulen studies stem cells in the intestines and how they can mutate into cancer. In this way, he unravels, among other things, means of preventing intestinal cancer and which medicines work well when the cancer has already developed.

Derailments in the large intestine

Our intestines are at work all day long, which is why it is important for intestinal cells to renew themselves continuously. Fortunately, thanks to stem cells stored in so-called crypts – special cavities in the intestines – they can do this. Usually, these stem cells grow into functional bowel cells, but sometimes things go wrong, and cell renewal is derailed. This can lead to colon cancer and metastases.

As both a doctor and scientist Louis Vermeulen, together with his team, studies how derailments in the genetic material of stem cells can cause colon cancer, focusing specifically on the earliest development of tumours. He does not shy away from straying from the usual paths. Indeed, he combines biochemistry and genetics with mathematical and physical models to map the dynamics of stem cells. With his multidisciplinary and innovative approach, he has made a major contribution to fundamental concepts in molecular oncology. Thanks to his research, it was possible for the first time to measure in the laboratory how much fitter mutant cells are compared to their healthy neighbours. Vermeulen also discovered that mutated stem cells have an advantage over healthy stem cells by, for example, dividing more quickly or actively suppressing good cells.

The advantage of these fundamental findings is that different types of mutations can now be compared with each other, after which it is possible to investigate which treatment can inhibit the mutated cells. A valuable discovery has been the insight into how giving extra support to the healthy cells enables them to clear away the diseased or mutated cells themselves. In this way, preventive treatments can be developed for people with familial colon cancer, who often get polyps in their colon (the preliminary stage of cancer) at a young age. Almost all of these patients develop colon cancer before the age of forty, unless their colon is completely removed. In this target group in particular, doctors often already know exactly what the first abnormalities that develop are. A new preventive therapy should therefore lead to the cancer staying away or only developing much later in life.

There are various hereditary defects that lead to a (greatly) increased chance of developing intestinal cancer. In the future, Vermeulen wants to focus on other syndromes, including Lynch syndrome, which increases the risk of intestinal and uterine cancer. For this hereditary disorder, he will try in a similar way to put the cells in which an abnormality occurs at a disadvantage compared to the healthy cells, so that the intestine will itself clear away the harmful cells.