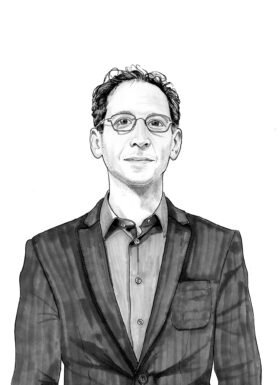 Olivier Hekster (1974) studied Ancient History at the universities of Nijmegen and Rome and Roman History at the University of Nottingham, UK. He was awarded his PhD by Nijmegen for his research on the Roman Emperor, Commodus.

After teaching at various Oxford colleges, Hekster was appointed Professor of Ancient History at the Radboud University in Nijmegen in 2004. He now heads up its Institute for Historical, Cultural and Literary Studies.

Hekster is chairman of an international network in which historians, classicists, archaeologists and lawyers from Australia, Europe and North America research the Roman Empire. In 2016 he received a Vici grant of €1.5 million from the Dutch Organisation for Scientific Research (NWO). He was also a member of the Young Academy of the KNAW.

Olivier Hekster examines the role of ideology and the use of mass media in ancient Roman times.

The power of the image

Many history books tell us about frenzied, brutal, decadent and incestuous Emperors of the ancient Roman Empire: names such as Caligula, Nero and Commodus especially recall stories of horror and brutality. But were those emperors really that bad? Or were their names vilified after their deaths especially in writings by senators who had their own axes to grind?

Olivier Hekster explores the role of image and mass communication in the power politics of Roman antiquity. He claims that “mad emperors” were in reality probably less crazy than later writings would have us believe. The distinction between “good” and “bad” emperors was probably less clear cut than is often thought.

Hekster has also shown how the Emperors themselves were actually aware of the importance of their own images during their reigns. They used the mass media of their time to influence popular opinion.

Images on widely used coins, distributed copies of busts and portraits, and inscriptions on buildings functioned as kinds of imperial tweets: propaganda messages whereby the emperor tried to construct an image of himself as a benign governor, a theatrical ruler, an heroic commander or a demigod.

Hekster studies how Emperors from their base in Rome used all the mass media then available to them in order to gain and retain power in all parts of their vast empire and amongst all classes in society.