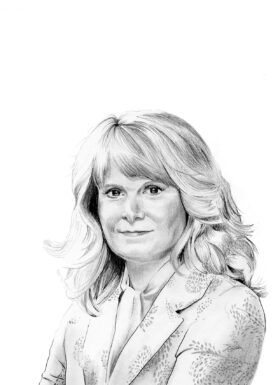 Patricia Dankers (1978) studied Chemistry at the KU Nijmegen, and gained her PhD at the TU Eindhoven in 2006. Afterwards she worked at the company SupraPolix and the UMC Groningen. In 2013, she defended her second PhD thesis in Medical Sciences at RU Groningen. She then worked at Northwestern University Chicago and continued her associate professorship at TU Eindhoven where she was appointed Professor of Biomedical Materials & Chemistry in 2017.

She has won several research grants, including a Veni and Vidi grant from NWO, and ERC starting and proof-of-concept grants. She was a member of the first Young Health Council (2011), and is an alumna of the Young Academy. In 2020, she was awarded the KNCV Gold Medal. She is keen to enthuse the wider public about the wonderful world of chemistry and materials.

Patricia Dankers researches and designs synthetic biomaterials that can mimic or even exceed the complex mechanical and biological functions of the natural extracellular matrix.

A blood vessel or heart valve made of biodegradable material

Billions of years ago, life on earth began with a simple cell. Much research is now being done on cells in the hope that one day we will be able to reconstruct such a cell. Little is presently known about how cells communicate with their environment, despite this being an important aspect of understanding a cell. Every cell in our body communicates with its environment, which – to put it simply – consists of a soup of molecules. This ‘soup’ sends signals to the cell, for example, to start dividing. If this extracellular matrix (the technical term for the soup) can be replicated, it also becomes easier to understand and influence a cell.

Patricia Dankers, who obtained her doctorate in both the technical and medical sciences, studies synthetic extracellular matrices, among other things, by reproducing them. She investigates how natural matrices work and tries to mimic this synthetically in the laboratory. This is done in such a pioneering way that the synthetic biomaterial can not only simulate the complex mechanical and biological function of a natural extracellular matrix, but also surpass it. Her smart design then makes it possible to repair ageing or damaged tissue in the body.

Dankers brings concepts from chemistry to the medical world and translates results from fundamental research into clinical practice. Thanks to her efforts, and those of her research group, there is now, for example, a heart valve made of a biomaterial that, over time, attracts cells from the body. In this way, new tissue that gradually replaces the foreign material is stimulated to grow. The synthetic material then gradually breaks down on its own, so that the patient is left with a new heart valve without any foreign material. In the same way, a plastic tube can temporarily replace a blood vessel. As time passes, vascular and muscle cells replace the plastic material and eventually a completely natural blood vessel is created. This has the advantage that when the blood vessel or the heart valve have repaired themselves, they no longer need to be replaced through major surgery, which is necessary with current techniques.

The next steps that Dankers wants to take have to do with a better understanding of how synthetic materials can control complicated structures in a complex organ. For example, she is now working on a material in which kidney tissue can grow. Such material must be designed in a way that enables it to adapt completely to the cellular environment in which it is found, for example by releasing certain bioactive substances locally, or by becoming a little stiffer or softer when necessary. In short, the goal is that future biomaterials learn to communicate well with the cells or tissue of a complex organ such as the kidney.