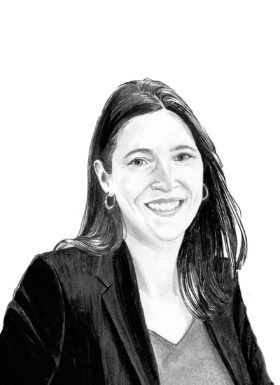 Rivke Jaffe (1978) studied Cultural Anthropology at Leiden University, where she also received her PhD in 2006. Since 2012, she has worked at the University of Amsterdam, where she holds the chair of Urban Geography. Her research focuses on the interdisciplinary field of urban studies, combining geographical, anthropological and cultural scientific insights and methods in order to arrive at a better understanding of everyday urban life.

In 2015, Jaffe was appointed a member of the Young Academy. She has been awarded multiple research grants, including a Veni and Vidi grant from NWO, and an ERC Starting Grant. She has been a visiting scholar at Yale, Columbia and the University of Pennsylvania. She is also co-director of the UvA’s Global Digital Cultures research centre.

Rivke Jaffe investigates urban space, power and inequality, with a particular focus on everyday urban life. Why is power unequally distributed in cities and how can this be changed?

Pop music, video clips and graffiti are not the first things that spring to mind when it comes to serious urban problems such as violence, poverty and exclusion. Yet Rivke Jaffe, who was herself a DJ in her spare time for a number of years, knows how to use precisely this popular culture as a scientific source for her fundamental research. To understand how everyday life in the city takes shape and how a city could change, reggae and hip-hop music and street art are for her important sources. This typifies her creative way of thinking and her enthusiasm.

The common thread in her work is inequality and power relations in everyday urban life. Jaffe’s research focuses on urban security and environmental issues, including the privatisation of security in various metropolises worldwide, for example criminal leaders taking over functions of the state in deprived neighbourhoods of the Jamaican capital Kingston, and the socio-spatial aspects of urban pollution in Jamaica and Curaçao.

Since 2014, Jaffe has also been studying how objects and technologies that are supposed to lead to greater security can simultaneously cause, reinforce or reduce inequality. For example, her research team discovered that WhatsApp groups used by the police to communicate with citizens do create a more direct relationship between police and citizens, but they also stimulate all kinds of prejudices about who is a danger, and who needs to be protected. Jaffe not only makes such a phenomenon visible, but also compares various forms of security with each other: how do WhatsApp groups differ from neighbourhood to neighbourhood, and how does the balance of power change when a security guard carries a weapon, or when a collision between a citizen and a policeman is filmed by a camera?

In her search for new knowledge on inequality and power in the city, Rivke Jaffe uniquely combines social science traditions with theories and methods from cultural studies and science and technology studies. She actively develops and maintains contacts with scientists from other disciplines and also increasingly with artists. These exchanges inspire her to constantly introduce new questions and insights within urban studies.

In the near future, Jaffe plans to explore how socio-political relationships are mediated by objects, technologies and animals. Her particular interest at the moment lies with police dogs, for example she is considering how dogs are consciously or unconsciously socialised into ethnic profiling and other forms of discrimination. Another question that concerns her is how both police and criminal organisations use digital technologies, and how this changes their spatial behaviour. If the police decide on the basis of an algorithm that they need to patrol a certain neighbourhood more intensively, how do criminal organisations use ICT to organise their drug trade in the city in response, for example?