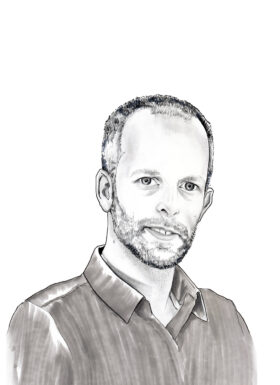 He has received, among others, an ERC starting grant, a NWO VIDI grant and obtained funding from the Bill & Melinda Gates Foundation. Bousema is an alumnus of De Jonge Akademie (the Young Academy, part of the Royal Netherlands Academy of Arts and Sciences) and received the Eijkman Medal in 2017 in recognition of his work in Tropical Medicine.

Teun Bousema researches how the malaria parasite spreads from humans to mosquitos, and which factors are relevant for this.

The spread of and fight against malaria

Causing hundreds of thousands of deaths each year, malaria is one of the most serious infectious diseases of our time. It is caused by a single-celled parasite, Plasmodium falciparum. This deadly parasite is transferred to humans by the sting of an infected mosquito but to complete the life cycle of Plasmodium, infected humans have to pass the parasite on to other mosquitos as well.

Epidemiologist Teun Bousema uses various approaches to study how the distribution of Plasmodium occurs. Interestingly, the parasite appears to be able to tweak the ratio between male and female parasites to maximize its success in spreading. But Bousema also looks at humans: what are the effects of malaria medication, and does it matter when an infected person starts using this?

Bousema has a great eye for detail. Why do some people in a village become ill much more often than others? It seems that not only do preventive measures play a part, but also genetic predisposition and the microclimate in and around the house can be important. He also discovered that not everybody who is infected with the parasite is able to transfer them to mosquitos. About one in twenty humans in areas with malaria display an immune response capable of making Plasmodium harmless in the mosquito that stings them. Bousema is trying to unravel how this immune defence works and which of the parasite’s proteins are sensitive to it. This knowledge could be the basis of a vaccine that interrupts the life cycle of malaria.