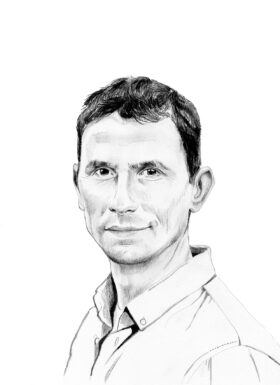 Walter Immerzeel (1975) studied Environmental Sciences at Utrecht University where he also gained his PhD at the Physical Geography department in 2008. He has a passion for mountainous areas and has lived and worked as a researcher in Nepal for two years.

He is now Professor of Mountain Hydrology at Utrecht University, where he leads a young team of scientists. Immerzeel has led numerous research expeditions to the Himalayas. His research focuses on the interaction between climate change and the cycle of snow, ice and water in the high mountains and he investigates this at this at different levels of scale.

Immerzeel was awarded Veni and Vidi grants from NWO, and an ERC Starting Grant, among others. In 2018, he received the prestigious Macelwane medal and became a fellow of the American Geophysical Union.

Walter Immerzeel investigates the effects of climate change on glaciers in Asia, and the availability of water for the millions of people living downstream.

Testing ground at an unprecedented height

The reports about the melting ice in Greenland and Antarctica, and the rising resultant sea level, are familiar from climate discussions. But in a continent like Asia, the impact of climate change is felt much more directly by the population. Almost a quarter of the people living there depend on the snow and glaciers in the mountains for their water supply.

Walter Immerzeel lived and worked as a researcher in Nepal for two years and has a great love of mountainous regions. He has led numerous research expeditions to the Himalayas, where he and his team have developed a testing ground at an unprecedented altitude. Where previously nothing was investigated, drones now fly over glaciers and rivers and there are weather stations that measure precipitation.

Whereas glaciologists ten years ago still mainly focused on glaciers, the research of Immerzeel and his team led to the pioneering insight that, in order to make good predictions, it is essential to analyse the entire water cycle in the high mountains. There is not only the melting glacier water to take into account, but also changes in rainfall, snow and groundwater. All these processes together determine how much water flows down the rivers. Until recently, the water cycle had never been properly measured at extreme altitudes. Immerzeel was the first to map the dynamics of precipitation patterns in the high mountains.

Immerzeel also used drone images to demonstrate the melting behaviour of so-called ‘debris glaciers’, as the debris-covered glacier tongues in the high mountains are called. He found that where there are small lakes and ice cliffs, the glacier melts 20 times faster than where there is debris on the ice. This finding has spawned a completely new line of research into debris glaciers, which is now being followed by more and more scientists around the world.

Immerzeel prefers to integrate his fundamental fieldwork into hydrological models that can calculate how much water flows down from the mountains. This information is also of great importance to the millions of people who depend on that water, for example to irrigate their land. By linking the need for mountain water to his measurements in the mountains, Immerzeel can predict when and where the greatest water shortages will occur in the future.

Immerzeel is not, however, most concerned about a potential water shortage, but about increasingly extreme weather conditions: increasing rainfall, large amounts of snowfall and avalanches, and glacial lakes that overflow, leading to severe flooding. In the coming years, Immerzeel wants to thoroughly understand how climate change is related to these ‘extreme events’, focusing on landslides, avalanches and glacier lakes.