The following laudatory speech was part of the presentation of the Ammodo KNAW Award to Arwen Deuss in 2015.

Most people might think that we live on a massive globe of stone, but earth scientists know that nothing is more untrue. Our planet Earth is a dynamic sphere whose inside flows, bubbles and bursts. On the surface, we only notice what is going on ‘under our feet’ if the thin crust tremblers, tears or is flooded.

Thanks to the fundamental research of Arwen Deuss, we now know for certain that even deeper inside the planet still more is hidden. If somewhere on earth a significant earthquake occurs, the entire planet continues to vibrate a little afterwards, as if it were a cosmic bell. These weak seismic vibrations can be detected all over the world.

Deuss was the first person in the world who managed to capture a “transversal” wave, picking it out of the cacophony of seismic vibrations: a type of vibration which may have nothing to do with the liquid contents of the planet but must come from solid, slightly stretchy matter. She succeeded by doing something entirely new: by combining the weak records of many places on earth. By doing so she managed to get a clear view of one transversal wave.

This was the first evidence that within the heart of the liquid ‘cloak’ a thick metal sphere exists – and all this was achieved before Deuss had even received her PhD, which was awarded by Oxford University. Last year Deuss returned to Utrecht and continued her research into the fundamental questions concerning the hard core. Or, as she herself sometimes refers to it: that little planet within our own planet, about as big as the moon.

This hard core is not a smooth and static bowling ball. The earth rotates around the sun and its own axis, but inside its hard core is also moving relative to the earth’s surface. The composition of the core is not homogeneous: it varies from place to place. For us here on the earth’s crust this has indirect consequences such as fluctuations in the magnetic field which move our compasses.

Arwen Deuss is primarily a seismologist, forming her theories about the structure of the earth firstly by analysing earthly vibrations. But the advisory committee values the manner in which she then goes on to use other subjects, such as mineralogy, to enrich her reasoning. In this way she ensures that her specific investigations remain closely linked to the larger story of our planet.

I would like to ask you to show your appreciation for Arwen Deuss, winner of an Ammodo KNAW Award for Natural Sciences! 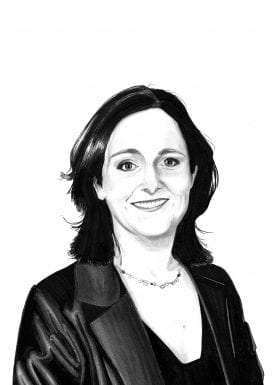 Under a thin hard crust planet Earth is a sphere within which liquid rock slowly flows around. But inside the flowing mass a hard globe has been discovered. It was suspected that such a thing existed but the evidence for it was only delivered when Arwen Deuss succeeded in picking up and analysing weak but characteristic seismic waves.