The following laudatory speech was part of the presentation of the Ammodo KNAW Award to Ronald Hanson in 2015.

Ronald Hanson made ​​headlines worldwide last year with a revolutionary experiment: the transfer of information from one place to another without affecting the matter or energy between the two points. It is called “Quantum teleportation”, an almost mythical concept which became famous when Captain Kirk in the science fiction movie Star Trek was teleported through the universe after giving the now infamous order to his chief engineer: “Beam me up, Scotty!”.

Hanson is always the first to make clear that his fundamental research will not lead to the teleportation of people. But the experiment was certainly a crowning interim step in his relentless efforts to freeze individual atoms and electrons in diamond crystals, in order to facilitate investigation and manipulation. That work took place not only in Delft but also in Japan and in the United States.

Quantum Physics is an area where, sooner or later, everyone’s intuition and imagination are exceeded. It is a world where things can simultaneously be one thing and another, or exist in two places at the same time.
It is also the territory of the famous thought experiment with “Schrödinger’s cat”: can we discover how a cat behaves in a sealed and dark box without making a hole in the box and thus influencing the behaviour of the cat? In other words, can a physicist measure the behaviour of an electron without affecting that behaviour?

Yes, sometimes one can, as Hanson has shown in recent years.
Some implications of quantum physics even go beyond the imagination of Albert Einstein. Such as “quantum entanglement”: the concept that the fate of two electrons in two places can be so intimately connected that when one electron is measured, simultaneously the opposite result should be evidenced by the entangled sister.

To prove that quantum entanglement exists, and can possibly be used to transfer information in super-fast quantum computers, is one of the biggest challenges in the field of quantum physics. Ronald Hanson and his research group are competing with a handful of other research groups around the world to win the gold medal in this race.

Ladies and gentlemen,
Last year he took a big step towards the final proof by using two entangled electrons to teleport basic information over a distance of 3 meters. Meanwhile, he is working hard on a larger scale follow-up experiment over a greater distance to add even more credibility to his results.
Please give your cordial applause for Ronald Hanson, winner of an Ammodo KNAW Award for Natural Sciences! 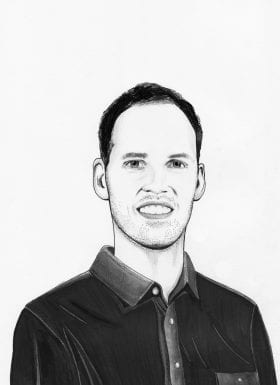 In the legendary science fiction film Star Trek Captain Kirk is teleported home from far away in the universe by his chief engineer “Scotty”. Physicists, including Ronald Hanson, have been trying to do something vaguely similar. “Quantum teleportation,” is an experiment by which information is transferred without the use of sound, light or any other form of energy.