The following laudatory speech was part of the presentation of the Ammodo KNAW Award to Thijn Brummelkamp in 2015.

During his PhD research in Utrecht, about fifteen years ago, Thijn Brummelkamp had already laid strong foundations for the study of gene function in healthy and diseased mammalian cells, including those of human beings.

Previously other researchers had developed techniques to disable each gene individually in simple unicellular organisms, such as yeast cells. Through careful study of the effect of these shutdowns they could gradually determine the functions of each individual gene. However this had not yet been achieved in mammalian cells, including human cells.

While still a PhD student, Thijn Brummelkamp made the breakthrough. Whilst at the Netherlands Cancer Institute he developed an inexpensive method whereby each of the approximately 25 thousand human genes could be disabled individually. His method made ​​use of so called “RNA interference”. At last the functions of all the human genes could be studied.

Brummelkamp’s method is now used in many laboratories around the world. He himself used it to discover how cancer cells become resistant to cancer drugs: through genetic changes they are able to circumvent the blockade of medicines.

At the prestigious Massachusetts Institute of Technology in Cambridge, USA Brummelkamp subsequently undertook an ambitious and risky project. He sought and found a way to shut down completely not one but several human genes at the same time.

Thijn Brummelkamp has also tested his fundamental research techniques on serious practical medical issues. In so doing he has identified the human proteins required by the Ebola virus to invade our cells. Such research enables new strategies to be developed in our fight against serious virus outbreaks.

Four years ago Brummelkamp returned to the Netherlands and the Dutch Cancer Institute. He is now looking for a key protein used by other viruses, bacteria and biological toxins to disrupt our human cells. And even more fundamental: he hopes to find out how few genes in a mammalian cell are actually necessary for it still to function.

Ladies and Gentlemen,
Thijn Brummelkamp was recognised by the committee as extremely successful, energetic, innovative, smart, critical and enterprising, with an impressive list of publications in leading journals to his name. He is an inspiration to his fellow researchers.
I would like to invite your applause for Thijn Brummelkamp, ​​winner of an Ammodo KNAW Award for Biomedical Sciences! 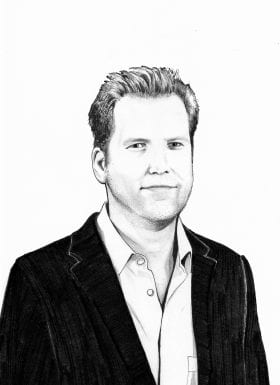 Thijn Brummelkamp is an energetic, critical and entrepreneurial scientist researching the function of each of the approximately 25,000 genes in the human body. He began by developing a way to turn off each of these genes one by one. Then he invented an even smarter method to do the same with a number of genes at the same time.