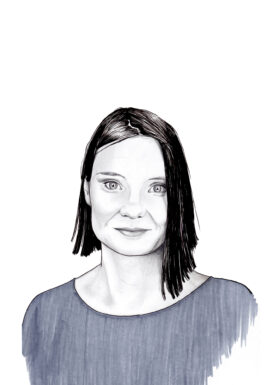 She wrote a groundbreaking book on female spies in the 17th century entitled ‘Invisible Agents: Women and Espionage in Seventeenth-Century Britain’, which was published by Oxford University Press.

Nadine Akkerman studies various manuscripts and decodes letter correspondence from the early modern age, and in doing so has uncovered an era in which women had a surprisingly large role in literature, politics and espionage.

A new history from old letters

The 17th century is often seen as the beginning of the modern age. For a long time, it was also considered as a period in which women had a limited role. Thanks to Nadine Akkerman we now know that this is incorrect. They just weren’t as visible…

In her study of 17th century correspondence, Akkerman walks the line between literature and history. Her research of the letters is challenging in more ways than one. Many have been written in code, and stored in the corners of the world that they were sent to. Some of them have never even been opened.

Nadine Akkerman has overcome these hurdles by being creative. For example, she uses special X-ray scanners to read unopened letters without having to open them, and has mastered various techniques in espionage to decipher code language.

The central character in the correspondence she has studied to date is Elizabeth Stuart (1596-1662), an ancestor of the current British Queen Elizabeth, who was particularly politically active which was unusual for a woman of her day. Stuart’s letters put Akkerman on the trail of a European network of female spies, and she defied invisible ink, unusual folding techniques and riddles in order to publish the first overview of female British spies in the 17th century. In ‘Invisible Agents: Women and Espionage in Seventeenth-Century Britain’ she shows that women played an important part in the culture of espionage and that these women made savvy use of the fact that they were never seen in this light.